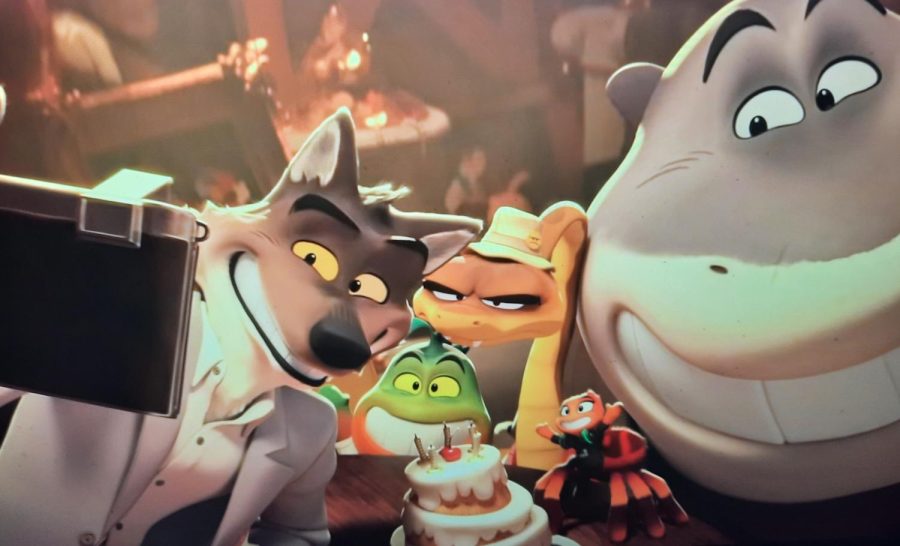 “Bad Guys” is a Dreamworks animated movie directed by Pierre Perfiel. The movie follows the main character, Mr. Wolf, through his journey from bad to good along with his partners in crime Mr. Snake, Mr. Piranha, Mr. Shark and Ms. Tarantula.

Mr. Wolf and his partners attempt to fool the masses into believing they’re reformed in order to pull off their biggest heist yet. The plan quickly gets complicated however when Mr. Wolf begins to question whether or not he really wants to keep being bad.

The movie utilizes a more experimental and interesting animation style as opposed to many of the recent movies to come from Dreamworks and other similar animation studios. Its style is somewhat reminiscent of the “Into the Spider Verse” movie with its allusions to classic 2-D animation while using 3-D models. This style also lends very well to the more fast paced action and chase scenes which are beautifully choreographed and are ridiculously fun to watch.

Without getting into spoilers, the movie’s plot is pretty basic. There’s a few unexpected twists and turns but besides those few it’s very predictable. The movie also contains a twist villain which has long since become a tired trope in animation. While it’s still a pretty entertaining story to watch, it’s not anything very special either.

The characters are for the most part pretty bland. While they have their base personality traits and relationships there is little more than that to most of them. While they do have a bit of development it seems a bit unearned. The only exceptions to this are Mr. Wolf and Mr. Snake. Despite the whole team technically being main characters, these two are the only ones that seem to have any depth. Their relationship and character development is very interesting to watch and is a large part of what makes the story enjoyable.

The secondary characters are decently well written and lend very well to the story but are also pretty forgettable. Many of them don’t seem to have a proper build up or any real weight on the story.

One thing that sets this movie far above the more recent Dreamworks films is the clear care and interest from the creators involved. There’s clearly a goal to create something that isn’t just a cash grab which now seems rare in animated movies not produced by Disney. While this movie still isn’t comparable to some of the other cinematic masterpieces to come out in recent years, it’s still definitely worth watching if you want a fun comedy.