The impact of influencers on school culture

As social media spreads, so does its influence on youth. The question is whether or not that's a good thing. 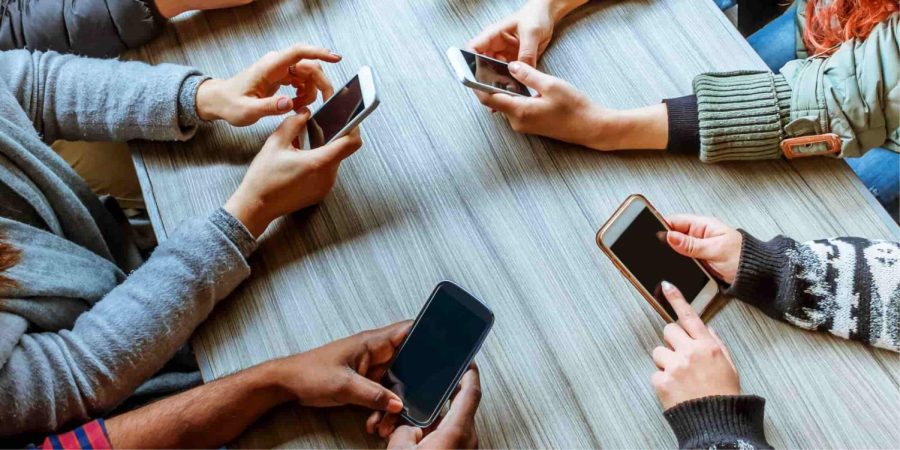 Online exposure has increased in the last two years as a result of the global pandemic forcing students to stay home.

Social media, a relatively new phenomenon in the last twenty years, has become a more centralized part of the day-to-day lives of most people, due to its ability to connect people from around the globe and allow users to witness a wide range of different cultures and beliefs they wouldn’t have access to without the internet.

However, as social media continues to become more incorporated into the real world, the effects that it can have on young people, specifically through its use of influencers or social media personalities, are leaving many people asking whether it’s influencing the ways teenagers act, dress and view themselves on an everyday basis.

In 2021 study by the Wall Street Journal, it was reported that while most of all users felt increased insecurities due to social comparisons to popular influencers like Addison Rae and Kendall Jenner, it was even more intense for teenagers, whom experienced higher rates of stress, dissatisfaction, and depression, as a result of high social media use and online comparisons.

With this recent data already providing a basis on how an increasingly online world affects adolescents, it  pushes one to wonder how the centralization of influencers affects students at CK, as well as our school’s culture overall.

When asked about her thoughts on the subject, Peyton Wyatt, a senior at CK, stated that while she didn’t experience any personal enticements from online influencers, she’s seen it affect the students around her and the trends seen at our school.

‘Personally, I think influencers are dumb and I’ve never really been one to look up to someone my age who does random dances online,” Wyatt responded, when asked if influencers have ever personally affected her.

Wyatt, who is a member of the CKHS Yearbook staff and gets a special look into the different aspects of the school’s culture, says she has seen some trends that she thinks as a woman of color are harmful.

“Gentrifying the shoe game,” she responded when asked what trends she had seen online disperse into her life at school, referring to how white influencers often take aspects from people of color for online attention, a play on the real life gentrification that takes place in urban or lower class communities.

Later, she elaborated on other ways she believed influencers were harmful: “I think a lot of influencers are white and super skinny and I feel like it pushes this narrative that you need to be skinny. A lot of these influencers use filters on their face and it makes a lot of teenagers and young adults feel like they shouldn’t have acne or textured skin.”

The idea that influencers create a false reality through filters and editing can be seen as true and it has been been proven that even influencers are affected by their cultivated social media presence.

A study done by a Norwegian influencer marketing platform states that nearly half of influencers surveyed said they felt their job affected their mental health and 32% specifically experienced having warped body issues as a result as their career as an influencer. Since those putting out edited content experience insecurities as a result of social media, it isn’t a wonder that normal teenagers also feel inadequate in comparison to online expectations.

‘With the clothes that they wear, that the money that they have, I feel like it can make other kids feel less fortunate,” Wyatt concluded.

She wasn’t alone in her feelings. Two other students, who chose to contribute anonymously, also agreed that while influencers don’t affect their own lives, social media definitely impacts school culture and trends they see among fellow students.

“I don’t follow a lot of influencers,” one senior mentioned. “I know for a fact that a lot of girls I’m friends with compare themselves to influencers like Madison Beer and other celebrities. A lot of the school spirit days are influenced by trends going on but a lot of behavior in the bathroom has been influenced by TikTok and it’s caused a lot of problems at our school.”

This senior is referring to the ‘devious licks’ incidents that occurred late last year, in which a pranking trend that originated on TikTok reached CK and led to actual destruction of property, including busted sink pipes and urinals in the boys’ bathroom.

“People think it’s cool to follow trends and that’s why the culture at our school is not very kind,” they continued. “I think the influence that social media has at our school is both positive and negative.”

The sentiment that influencers can be harmful to school culture isn’t just shared between seniors; underclassmen and staff both agree that increased social media can have a non positive impact on teens.

‘Kids are growing up, so I think they’re just trying to try things out,” one junior stated. “An influencer can say something and everyone will take it as a joke, but you could make the same joke and the people around you or yourself could end up hurt or offended.”

Mr. Tracewell, an English and Media teacher at CK, says that while he’s seen relatively the same amount of social media use in teenagers as prior to the pandemic, he says that the cellphone has become something of a security blanket for students.

”There’s no way you can not be influenced by these influencers. It’s even in the way we speak, things are spreading virally. I saw a video of Australian teens talking using the slang American teenagers use. It wasn’t unique, but it was the same teenage talk as American culture.”

Tracewell went onto elaborate on other aspects of social influencers that he believes to be harmful, including the type of content teenagers consume.

‘My English students do a journal every day and I can see their moods up and down. A lot of them have mentioned the dark places they’ve went when looking at this stuff because you judge yourself according to what you see.”

Similar to Wyatt’s earlier opinion that the use of filters warps the view teenagers have on their own bodies, Tracewell made it known that the illusions created by influencers on social media create an unfair competition of comparisons between the filtered pictures we see online and our own very real appearances.

‘The people creating that content, they’re going to put their best selves forward. They’re going to do themselves up perfectly and that’s a hard thing to judge yourself against,” he stated. “The average teenager can never really leave high school because you’ve got social media. You can’t turn off school, you can’t turn off the drama.”

Despite the weight that social media and influencers can create for adolescents, it’s still important to recognize how the internet has positively influenced the lives of teenagers and how the resilience of students has prevailed despite increased societal pressures, both socially and online.