Senate Bill 5395: a Source of Controversy and Change 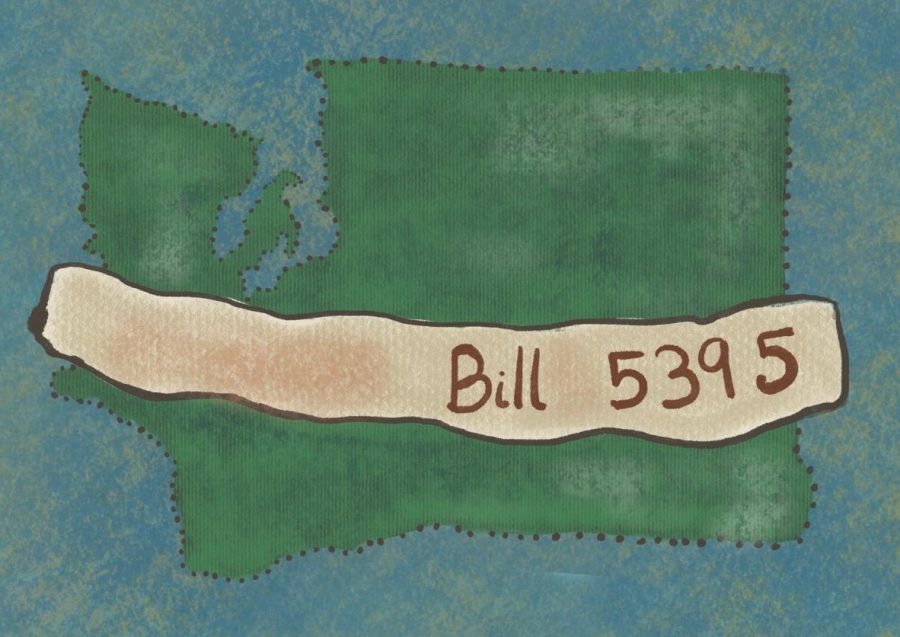 A graphic displaying Washington state, with a banner reading "Bill 5395" across it.

Last month, Washington state voters passed Senate Bill 5395 with a 57.82% majority. The cause of much controversy, the bill aims to provide all public school students with comprehensive sexual health education by the 2022-2023 school year.

One source of opposition was a graphic social media post that created false conceptions about what the curriculum changes the bill would cause; some members of the public feared that the bill would cause young students to be taught inappropriate content.

However, students will not be taught curriculum that is inappropriate for their age group; according to the legislation, “‘comprehensive sexual health education’ means recurring instruction in human development and reproduction that is age appropriate and inclusive of all students, regardless of their protected class status.”

The legislation specified the content covered in different age groups, as well; in kindergarten through third grade, students are taught social-emotional learning skills that adhere to the standards that the office of the superintendent of public instruction (OSPI) published. No content about sexual relationships or development are included in the curriculum for that age group.

The K-3 curricula includes learning about personal space and boundaries, along with the other required topics, including, but not limited to: identifying emotions, goal setting, problem solving, and understanding the relationship between actions and consequences.

“[The social-emotional learning] really has to do with learning how to be nice, learning how to play together, [and] how to make decisions,” Jeni Zapatka, Central Kitsap School District’s Director of Curriculum and Instruction, said.  “[Things like] if you’re sad, what do you do?”

Zapatka also said that in the younger grades, students would “[look] at traditional gender roles and how they don’t necessarily have to [adhere to them]; a man could be a nurse, a stay home parent or a secretary, […] and a female could be a policeman, a firefighter, [or] a pilot.”

There will also be some updates made to the upper grades’ curricula.

“There are two changes that are going to be put into place as a result of this bill,” Zapatka said.  “The first one has to do with understanding of consent, and making sure that consent is given.

Now, that does not limit itself to sexual behaviors, […] but in the lower grades, what that looks like is respecting people’s personal space.”

Central Kitsap High School vice principal, Scott Wilson, emphasized the importance of education on consent, stating that it is important that students learn that the “[absence of a] no is not enough.”

The second change to be implemented is education on bystander behavior, which Zapatka detailed gives students information on how to address situations where they witness bullying or unwanted sexual advances.

Washington is the first state in the country to pass a sex education bill. Despite the fact that Washington state voters passed the bill themselves in November, there were still people, politicians and groups that opposed the bill.

The aforementioned graphic images posted on social media were edited into a lesson plan for fourth graders. They were a source of concern for many people.  However, according to the OSPI site, those images were from a book listed on a handout for parents who wanted to continue educating their children on the topic of human growth and reproduction; those materials are not included in any curricula for students.

On their website, the Washington State House Republicans voiced that they thought the bill would initiate sexual education too early in a student’s life, and that “conversations about sexual education should start at home at a time when parents think it is appropriate.”

They also said that the bill takes away local control of the curriculum they choose, which was another reason they listed in opposition of the bill.

The legislation itself gives parents the right to both review the content of the curriculum their children will be taught and to opt their children out of comprehensive sexual education with a written request.

Along with this, the OSPI site stated that the bill will not revoke local control, and districts have several different options when choosing a curriculum: there are multiple curricula they could choose from, or they could make their own.

An article published by the Sequim Gazette quoted Wash. State Sen. Phil Fortunato (R) saying that the bill promotes a gay and transgender agenda. The legislation does not specifically mention people within the LGBTQ+ community, but it also says that comprehensive sexual health education should be inclusive of everyone, including those in protected classes  (which LGBTQ+ people qualify as).

“The language that we wrote with was very specific to include a recognition of the civil rights of LGBTQ youth and all of those who are a protected class in the state of Washington,” Washington State Superintendent of Public Instruction, Chris Reykdal, said in a press conference with student reporters.

Zapatka added that the curriculum includes ideas of treating people who are a part of protected classes with respect.

In a voluntary survey, some CKHS students gave their feedback on the bill and the part of education it will impact.

One anonymous student said that they thought that parents should be given the choice of whether or not their children receive sexual health education, as it can be a highly personal topic. The bill abides by this idea, allowing parents to opt their children out of the classes.

Many students said that in general, health education should include a more in-depth coverage of mental health. The Health Impact Review of ESSB 5395 from 2019 acknowledged different groups that experience inequities, such as LGBTQ+ students, students in juvenile detention, or students with mental disabilities, may experience mental health struggles in relation to a variety of issues. However, mental health is not explicitly discussed within the bill.

When asked about the adequacy of LGBTQ+ health education, many respondents felt that the curriculum could be expanded to accommodate people of the LGBTQ+ community and educate other students on the issues that they face. This could be done by including more education on same-sex couples, how they can protect themselves, gender-affirming surgeries for transgender people, and a lesson on preferred pronouns.

“Our schools need to…incorporate LGBTQ+ focused health education,” Evie Engstrom, a sophomore at CKHS, wrote. “And this education needs to not just be for sexual safety, but also for [safely] using [chest] binders [for transgender individuals] or exploring your gender identity. […] [And,] I know for a fact that the way these kids are discovering the information they need to feel comfortable with who they are and [who] they like is looking it up on the Internet and…that is not a safe nor a healthy way of getting that kind of information.”

“I do not believe that this education should be separate,” one student from CKHS, who preferred to remain anonymous, wrote.  “I believe that everyone should be educated on safe health practices[,] and that teaching [them to] students can help them grasp a new perspective of their peers and help them learn tolerance and acceptance towards others, which is an important skill for life as a whole.”

Some respondents also emphasized the importance of teaching students about the use of preferred gender pronouns (PGP) and why they believe it is important to use them and respect transgender students.

“PGPs are a person’s first way (other than their name) to let others know how they identify and what they feel inside,” Raenae Maleport, a sophomore at CKHS, wrote.  “In no way[,] shape or form[,] does another person have the right to impede on one’s expression by deciding [that] their pronouns are optional. Pronouns are a right.”

While Bill 5395 aims to have sexual health education that is “inclusive to all students,” there are many improvements that schools could make to health education, as outlined by the CKHS students who responded to the survey.

Even with the differing opinions in regards to the bill and its goals, Washington state citizens passed the legislation by 61,7724 votes in November.

Because of Bill 5395, public school students in Washington state will be provided comprehensive sexual health education from kindergarten to senior year. By the 2022-2023 school year, CKSD will have updated their curricula to include education on bystander behavior and positive consent. Other districts in Washington State will have to make changes to their curricula, as well.