The Importance of Prom Throughout the Years

Looking through the history of prom and then seeing how it is now. 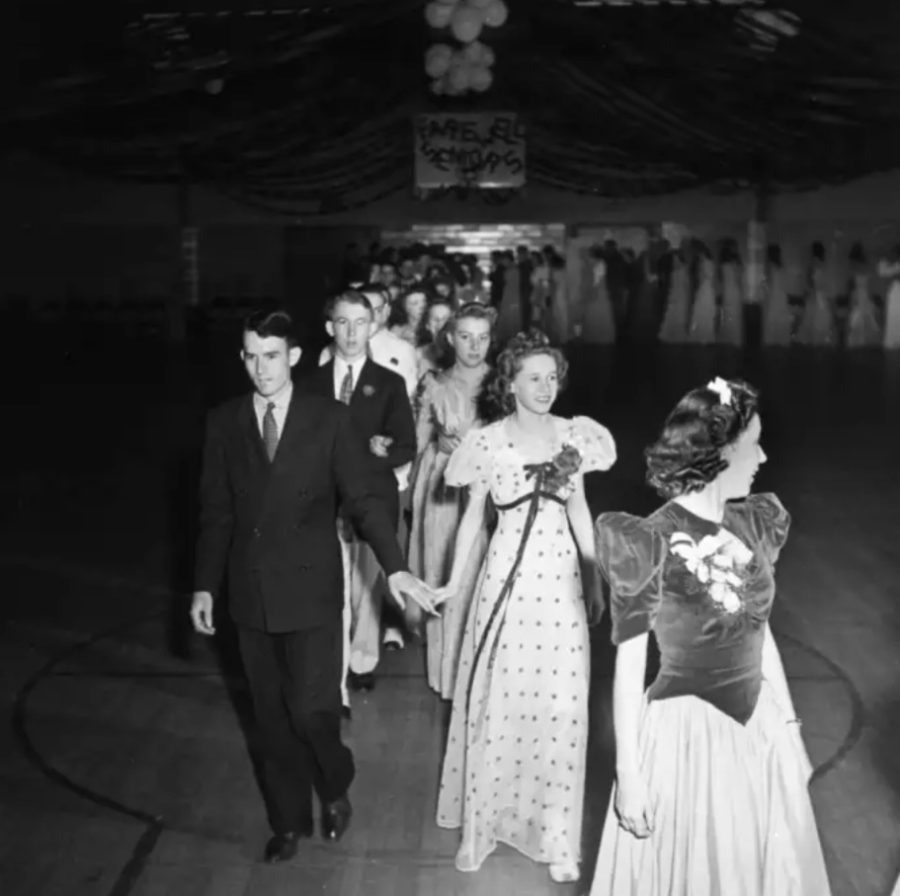 Greenbelt, Maryland Highschool seniors in the gymnasium at their prom dance in 1940s (Credit: Marjory Collins/Anthony Potter Collection/Getty Images) No modifications or restrictions

Prom is just around the corner. So that means fundraisers, promposals, and matching clothing. Although this fun occasion seems innocent, it actually has a dark history.

Prom, or the French term “promenade,” used to be a senior graduation party in the early 19th century. The party was for women to be introduced to polite manners and etiquette. It used to be described as “the parading of wealthy young women in front of potential suitors during debutante balls.”

When middle-class white women would graduate, “prom” became a democratic version of debutante balls because they were less expensive and more open to other classes. These proms also had the same rules as debutante balls.

So that meant, in theory, anyone could attend, except for people of color, because of Jim Crow Laws and unequal education.

During the 1950s, prom significantly increased in popularity after a post-war boom and a new consumer market that took teenagers’ interest. The dances would have boys asking the girl out. Never the other way around.

“Girls who [try] to usurp the right of boys to choose their dates will ruin a good dating career.” An advice book for teenagers, according to Ann Anderson.

Jim Crow laws were abolished in the 1960s. But white-only proms persisted in the South. If there was an off chance that the school was integrated, there would be two separate proms; one for white students and one for black students.

Southern schools had segregated proms for years, so the transition was slow. The most recent case of a school’s first integrated prom was GA, Wilcox County High School, in 2013.

Although there’s been a slow change for integrated proms, there has never been a same-sex couple at prom. Until 1979, Randy Rohl and his date, Grandy Quinn, became the first open, same-sex couple to prom.

There was another case in 1980 where Aaron Fricke sued his school, Cumberland High School, for not allowing him to take his boyfriend to prom. The principal argued to protect them from the backlash; while Fricke understood the concern, he hoped this could create a difference in the world.

“I feel I have the right to attend,” Fricke said. “I feel I wanted to go to prom for the same reason any other student would want to go.”

Although prom’s history isn’t picture-perfect, it has evolved through the years into a party where seniors can come together. It’s one last party all seniors can go to to have fun.

Prom could divulge many different meanings for seniors.

“I guess for different people it means different things,” Jeremiah Draxler, senior at CKHS, said. “Like for me, it’s the last dance at a school…For couples, it could be more of a romantic chance for them to hang out and get to know each other better.”

A prom is now a place where people can make memories of the most outlandish moments.

“I don’t remember a ton from that evening,” Daniel Sullivan, a staff member at CKHS, said. “Other than everyone at one point on the dance floor did ‘The Sully’. Which was apparently a bad dance move I was doing and they all tried to pretend to be me.”

After everything said about prom. Don’t let its history of it change one’s viewpoint. The past isn’t the greatest, but it’s now evolved and changed dramatically since the early 19th century. Now, it’s something most seniors are excited about.

“I think it’s something we all look forward to all of high school,” Phia Vaitautolu, senior at CKHS, said. “… It’s kind of traditional.”