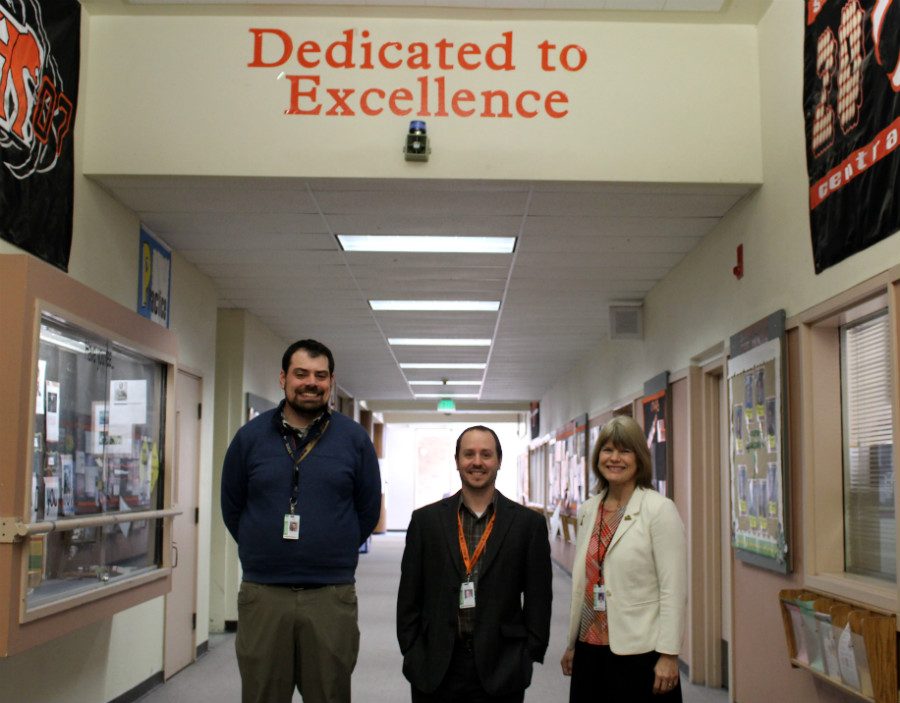 Jeanne Beckon, Assistant Superintendent of Human Resources, announced on Thursday, Feb. 28 that some schools within the Central Kitsap School District (including Central Kitsap High School) will undergo administration changes next school year. After two-years of a Co-Principal system, Craig Johnson will be the only CKHS Principal in the Fall of 2019. Gail Danner is preparing to enter a new position as Olympic High School’s Principal. CKHS will also gain a new administrator–Miranda Smallwood (who currently works at Klahowya Secondary School) will join CK as an Assistant Principal alongside Matt Clouser.

“Each Administrator transitioning to a new school looks forward to getting to know and supporting their new students, staff, and community.  These changes will be in effect beginning July 1, 2019,” said Beckon in an email to Central Kitsap staff.

Although the change means there must be some goodbyes, the administrators look forward to something new. “I’m very excited,” said Danner. “It’s a good challenge for both me and Mr. Johnson to be a sole Principal. The Co-Principal thing has been great these last couple years, but I think we’re each ready to take on our own building and expand our skillset into a single-Principal role.”

After working at CKHS for 11 years (nine as Assistant Principal, and two as Co-Principal), Danner has learned that administration is all about collaboration. She feels her greatest contributions to the school have been her work in systems management, and her efforts to build relationships with staff as well as students.

“Building leadership is really about the people, and seeing where I can fit in and help. And really trying to keep that focus on how kids are building their futures,” Danner explained. “Everything is about we, it’s about all of us here.”

Smallwood also views relationship building as a critical part of working as an Assistant Principal. “I think that the students, families,and staff that I work with would say that I bring a relationships-focused personality to any school that I work in,” she said.  I believe in the power of a community. And I teach and lead with my heart on my sleeve.”

As the administration changes, Smallwood is looking forward to joining the Cougar community and learning more about the specific ways she can help CKHS students. She mentioned interest in discovering the different kinds of diversity represented within the student body, and the cultural backgrounds that students come from.

When she joins the CKHS administration staff, Smallwoods goals include “learning and identifying the needs, wants, hopes, and dreams from the community of CKHS.”

She also explained that “an Assistant Principal has many roles, including: supporting and upholding the CKSD student rights and responsibilities; supervising and coaching instruction; supporting all programs and initiatives within a school; and communicating student goals and progress with families and community members.  My hope is to approach all of these roles with an equity lens and to work collaboratively with others.”

Johnson, soon to be the solo Principal, is also optimistic about next school year. Although changing staff means new challenges and relationships, he says he doesn’t expect that it will necessarily be more or less difficult as a Principal. “I anticipate next year will be very exciting for many reasons, include moving into a new beautiful facility and building on the foundation of CK’s history as we prepare students for the future,” said Johnson.

CKHS has several goals for next school year. Johnson’s primary concern is making the transition to the new building as smooth as possible for students and staff. He also described goals of ensuring the campus is a safe place for all students, and building academic programs “so that the educational experience of CKHS students is second to none.”

After six years of working together, Johnson and Danner plan to continue collaborating, even though they will be working at different high schools in the district next fall. Johnson stated that “while the program needs and specifics at each school may differ, we absolutely will work together (and with the Principal of KSS and Barker Creek) to make sure the students of our district have the skills and tools necessary to take advantage of every opportunity available to contribute to our community and beyond after they leave Central Kitsap School District.”

Johnson expressed gratitude towards Danner for the effort she has put into her job at CKHS. “What I appreciate most is Mrs. Danner’s dedication and focus,” he said. “ No matter what is happening on a day to day basis, she’s always thinking about making decisions that support students’ needs in the long run.”

Danner described how much she has loved her 11 years at CKHS, and wants students to know she is not leaving because of any experiences within the school, but rather for her own career development.

“I’m going toward a new challenge and opportunity, but there’s always a little bit of sadness in saying goodbye to people who have been so important in my life for so many years,” said Danner.