‘Man’s Search For Meaning’: An Account On Finding Meaning In Desperate Times

As the novel approaches it's 75th Anniversary, what value can we find in it today? 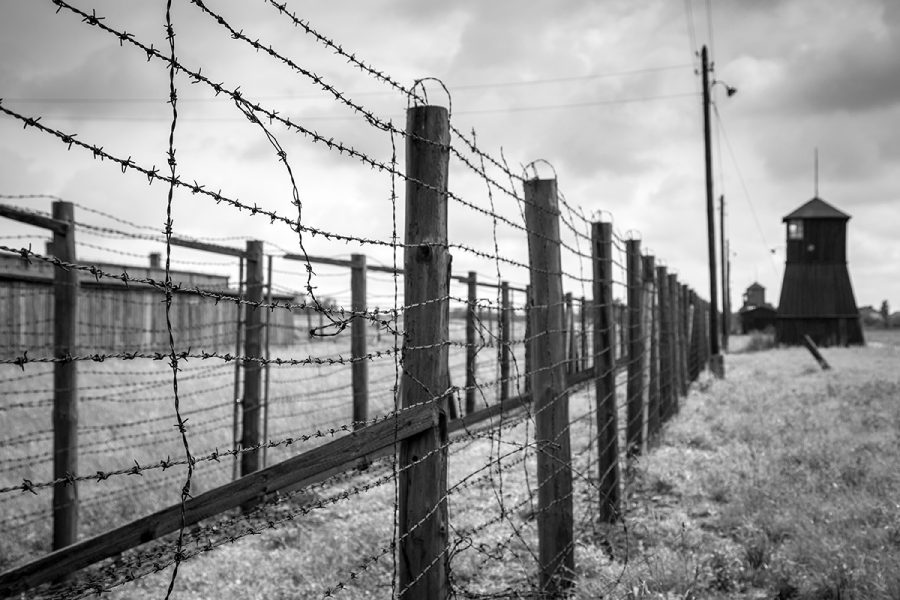 Majdanek Concentration camp on the outskirts of Lublin, Poland

A locomotive, emitting plumes of undulating smoke, tears across a countryside sheeted in white like a pencil streak across a blank canvas. Within the bowels of this behemoth, the fireman tirelessly toils with his steel shovel, soot and grime collecting around his hardened jaw and worn eyes. For the train attendants and guards, there is nothing here but routine. The shrill cry of the train’s whistle blaring through the night. The coupling rod oscillating back and forth in the deterministic motion. The rattle and quake of the train cars as they pass over the uneven earth and rail, the rail which was once lain and coupled for prosperity and commerce, this rail now the path on which a sacrificial offering is shuttled, the alter just over the horizon. All of these utilities and sounds, all the guards, all the train mechanics, the unseen administrative body, all cogs in a machine of systematic death, the Nazi machine.

Jewish prisoners process from the train cars, huddled and weary beneath the revealing spotlights and pale night sky, winding and weaving through a maze of barbed wire and crushed snow, their lives in the hands of an institutional power predicated upon their dehumanization.

These Chosen People once again feel the latent negatives of the title Chosen, cast into a world that rejects them, a world that seeks to wipe them out. Such has been the way for thousands of years. Here, as before, they are stripped of personal effects and names, assigned numbers and grueling labor with meager food portions to sustain their weary toil. They become the mangled, emaciated, hunched laborer on the ridge yonder who lays brick and digs ditches under the vigilant gaze of the uniformed SS man. They eventually come to comprise the work brigades who shamble their way to and fro at dawn and dusk, the methodic thud and crunch of their worn jackboots on snow-laden ground just barely audible over the barking of the SS men, the institutional sheepdogs. Piled back into their pen at end of day, the Jewish inmates drag themselves onto wooden bunks to escape into the embrace of their dreams, another day having come and gone.

What is there to be done for these bereft souls? These sunken bodies who wade through the mud and corpses and brutality of camp life, they who are reduced to nothing, stripped of that which makes humans human.

We, the observers of the concentration camp routine, cannot help but feel boundless pity for those persecuted folk. We ask ourselves if we would be able to contend with the existential horror of camp life were we to be placed in the worn, dilapidated shoes of the Jewish prisoners. This gives rise to a greater question: “How does one find the will to continue surviving in a hopeless and unchangeable situation?”

In a rather profound account of a man’s experiences in the concentration camps, this question is explored. The author of said account, titled Man’s Search For Meaning, is Austrian psychiatrist and neurologist Viktor Frankl, who spent much of 1944 and 1945 in both Auschwitz and then Kaufering III, a small labor sub-camp.

The book establishes from the beginning that it intends not to be an account of the facts surrounding the Holocaust. Rather, its mission is to explore the psychological experience of the inmate. In Frankl’s own words, “How was everyday life in a concentration camp reflected in the mind of the average prisoner?” To answer this question, Frankl centers his essay around three phases which he has noted as typical in the experiences of many prisoners. The first phase is marked by the shock a prisoner feels upon admission to the camp, the second phase describes the prisoner as being fully entrenched in the camp’s routine and madness, and the third is the prisoner’s reaction to liberation.

Frankl, as our guide, takes us through his own personal experience in the mechanized hell, the same shared hell that so many other survivors battled through. He is akin to what Virgil was for Dante in the Divine Comedy, a guide who shows us the great struggles waged within the internal and external hell of the prisoner. We come to see, from this journey, how able the human body and mind are in adapting to the most adverse of circumstances, a testament to our own tenacity in the face of hardship.

This account expresses the lengths for which one can decay when put into a dehumanizing circumstance. After the initial shock of admission, we are shown how the prisoner adapts to his new environment with one express goal in mind, their own individual self-preservation. Frankl expresses how all things which were not immediate to fulfilling the end of self-preservation were completely disregarded.

The disregard for others over oneself, for example, ushers the inmate through a regressive transition to a primal state of mind. An inmate did their best to inconspicuously follow the camp’s routine, this being of paramount importance to saving one’s own hide, even when the routine disregarded any appreciation for human life and dignity. In following a routine of this type, the prisoner becomes more and more apathetic towards the horrors of camp life.

Frankl notes how the apathetic prisoner began to adopt a passive attitude to his situation. The apathetic inmate tended to feel his life had already been decided by a fate beyond his control and that nothing could be done to improve the hand that he had been dealt. In dehumanizing the prisoners, the camp had succeeded in stripping away the fundamental belief that each inmate possessed any semblance of free will, this being important in how the prisoner perceived himself. If the prisoner soon begins to believe that, left to their own devices, they are incapable of improving their predicament in any way, much of the predicament begins to feel hopeless and far darker.

It is here where Frankl denotes two types of prisoners, the aforementioned apathetic types and those who feel something can be done to improve their situation even if it is through as meager an action as giving away a last piece of bread or giving words of encouragement to a typhoid stricken patient. In other words, those who sought hope despite the odds were those best able to contend.

In finding a relationship between our own lives and the lives of the prisoners in the essay, we must understand that there is a choice presented to us at each and every waking moment of our lives. When the world turns sour and all seems lost, there is always a choice to be made in how much forces beyond our control are allowed to define us as individuals. In essence, we possess the ability to choose how we react to the constant flow of events, many of which we had no initial control over.

As in the book, the victims of the Holocaust had little control over the regime changes and subsequent conflict that brought it and the Second World War to fruition. They could do little as they watched their families and their countrymen are forced onto trains and shipped off to camps where many years of misery would play themselves out. Each prisoner knew not the whereabouts of their families or when they might next taste the airs of freedom. Yet Frankl articulates that despite these most uncontrollable circumstances, it ultimately fell upon the inmate to decide how much of themselves they would allow the camp, the Nazi machine, to define.

We, locked in the ebb and flow of our own lives, are at all times accosted by life and asked what it is that will define our existence? Suffering is as great a part of life as any, an inescapable caller who constantly raps at our doors, ever-persistent even when we are at our worst. When he has made it seem as though nothing can be done for our souls, we still have a choice in how much we allow him to get to our head. In battling suffering, the ugly pillar of life’s great epic, we are challenged to change ourselves to best contend with its presence.