The 2017 Women's March, which drew over 470,000 people protesting for immigration & healthcare reform, environmental protection, and reproductive rights to show unity in opposition to President Donald Trump

The Uncertain future of Abortion in America

The June Medical Services v. Russo Supreme Court decision has the potential to decide the future of American Abortion laws

Under a fabricated alias designed to preserve her real identity, Jane Roe filed a lawsuit against Texas district attorney Henry Wade that would establish the most controversial women’s health precedent in recent history. Roe challenged a 1961 Texas law that made abortion, the deliberate termination of a pregnancy, illegal unless directed by a doctor or physician. Roe contended that the state law was unconstitutional and infringed upon her personal privacy rights, protected by the First, Fourth, Fifth, Ninth, and Fourteenth Amendments.

In a historic seven-two ruling in favor of Jane Roe, the Supreme Court ruled that the Texas law challenged the fundamental “right to privacy“ that defends a pregnant woman’s choice of whether to have an abortion.

Few supreme court cases have had as large an impression on the American political landscape as Roe v. Wade. When the court found that the state of Texas violated the Fourteenth Amendment right to privacy, the ruling became an issue of state implementation.

Since the landmark 1973 decision, over twelve-hundred restrictions have been placed upon the right to an abortion. Several years after the Roe v. Wade decision, the state of Massachusetts passed a 1979 law that required parental consent for minors to undergo an abortion (Bellotti v. Baird).

In 1978, the Arkon City Council enacted an ordinance with seventeen provisions detailing the regulation of safe abortions (Arkon v. Arkon Center for Reproductive Health). Among these provisions were a mandatory twenty-four-hour waiting period, parental consent for an unmarried minor, and physician counsel to dissuade the patient from undergoing the procedure. Primary Care Physicians are required to provide patients with misleading or often incorrect information to dissuade them from obtaining an abortion.

In 1992, the state of Pennsylvania adopted new abortion provisions requiring informed consent, a twenty-four-hour wait period prior to the procedure, and the required permission of one parent in the case of minors (Planned Parenthood v. Casey). That same year, the state of Florida prevented demonstrators around an Aware Women Center for Choice clinic from entering a 36-foot buffer-zone, making excessive noise, and approaching patients within a 300-foot radius of the clinic (Madsen v. Women’s Health Center, Inc.).

Healthcare services that provide access to abortion frequently support a woman’s right in name only. In many cases, women in search of these services are required to drive hundreds of miles or even transfer across state lines because of unreliable in-state programs.

Title IX, a federal program assigned to providing family planning and related preventive health services, has been diminished since the Trump presidency with the closure of nearly 900 clinics around the country. Planned Parenthood, a nonprofit organization that provides sexual health care and the main benefactor of the program, recently left the $296 million Title IX program because of new restrictions over abortions.

A 2019 poll from the Pew Research Center, a nonpartisan American institution, indicates that 61% of the representative American population believes abortion services should be legal in all or most cases.

So why is there friction toward abortion clinics and why is the issue of abortion different than any other medical procedure?

Rooted deep in religious and social values, the anti-abortion “pro-life” movement seeks to restrict abortions in America and repeal the results of Roe v. Wade. Many social campaigns like Students For Life, a youth-centered pro-life movement, and the National Right to Life, a longstanding anti-abortion group, support the conviction that abortion equates to “the killing of an unborn child and the murder of a living child”.

Both the Catholic Church and the Protestant denominations share a similar viewpoint that “human life begins at [the moment of] conception”.

Since 1974, one year after Roe v. Wade, the Washington D.C. March for Life has proved the largest centralized congregation of anti-abortion protesters. As of late, the pro-life activists have incorporated the controversial science of fetal development in demonstrations.

Those favoring the option to perform abortive care, the “pro-choice” movement, strive to allow access to reproductive healthcare to everyone throughout the United States under the precedent established in Roe v. Wade. Activist groups like the Abortion Rights Campaign and the National Abortion Federation organize in the annual Women’s March in Washington D.C. (as well as most major cities).

The piercing divide between both ideological movements stem from different perceptions about the definitive beginning of life. The Charlotte Lozier Institute, an independent research team consisting of physicians, sociologists, and policy researchers, published a comprehensive evaluation for what they understand to be the beginning of sentient life. Doctor Maureen Condic established that life “begins at sperm-egg fusion is uncontested” in a 2014 piece entitled ”A Scientific View of When Life Begins”.

Respected scientists and scholars from universities and independent organizations commonly accept that biologically speaking, the origin of human life begins when sperm fertilizes an oocyte and forms a zygote. The pro-life movement uses the notion of human creation to connect the termination of an unborn fetus to the murder of a child. This understanding of the human prenatal development process is dangerously misguided.

After fertilization, the egg begins to divide cells and leave the fallopian tube and attach to the endometrium (uterine wall). Within three weeks of fertilization, the egg has become an embryo. After eight weeks, the embryo has become a fetus. Throughout the entire developmental process up until birth, the developing fetus is solely dependent upon the mother. Without the protection and nutrition provided by the mother, the fetus cannot survive.

The mother, therefore, has the responsibility to determine the outcome of the developing fetus. In the United States, surveys by the Rape, Abuse & Incest National Network (RAINN) and the Statistica Research Department has corroborated findings that over 17 million women and girls have been the victim of rape, sexual assault, or molestation. 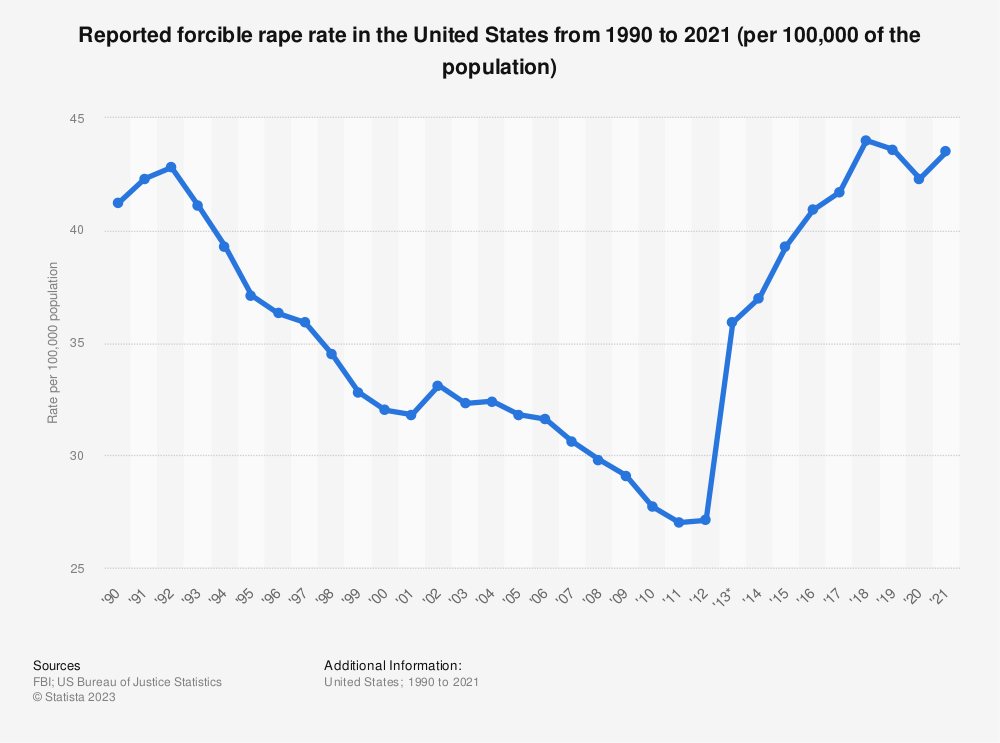 Graphic from the US Bureau of Justice Statistics powered by Statista displaying the rate of reported instances of rape per 100,000 people

On the March for Life website, there are readily accessible blanket answers to defend the prevention of abortion, even in the case of unwanted pregnancies as a result of rape. This notion of defending criminal actions and punishing victims can create a cycle of abuse that continues to be devastating for victims.

The ability to decide personal choices without external influence indicates the purest realization of equal rights. Limiting access to vital reproductive services defies the very definition of women’s rights. Women who have the knowledge and access to reproductive healthcare are actualizing the advancement towards gender equality.

As a result of an increase in the prevalence of contraceptives and access to reproductive health services like Sexually Transmitted Infection screening, sexual education, and abortion services, the unintended pregnancy rate among adolescents has been declining since the 1980s. Planned Parenthood, which provides access to all of these vital health services, allows an external source of information and care beyond what public education can support.

Studies from Harvard University and the University of Southern California have corroborated that American public education on sexual health is inadequate, and can vary widely from state-to-state and even county-to-county. A report by the Center for American Progress (PAC) found that “only 24 states and the District of Columbia mandate sex education in public schools, and even fewer states include consent”.

When the fate of women’s reproductive lives are guided by outdated practices and traditional social values, challenges to progress have the ability to demolish an entire movement. President Trump has famously eroded many advances to abortion rights. In one of the first acts as president, Trump dictated that US-supported international family planning groups may no longer provide safe and legal abortion services. However, President Trump has ensured a defense for pro-life ideas in his Supreme Court appointments.

After the confirmation of justices Neil Gorsuch and Brett Kavanaugh to the Supreme Court, the makeup of the court has been altered in favor of more pro-life ideologies. June Medical Services v. Russo, the most recent Supreme Court challenging abortion rights was set for an initial hearing date of Mar. 4, 2020. The Lousiana law mirrors a Texas law struck down in Whole Woman’s Health v. Hellerstedt back in 2016. WWH v. Hellerstedt was found to impose an undue burden on women seeking abortion services and did not advance the state’s interest in upholding women’s health.

When WWH v. Hellerstedt proceeded onto the Supreme Court docket, the justice decisions favored a more neutral position due to President Obama’s nominations of Sonia Sotomayor and Elena Kagan. Associate Justice Neil Gorsuch, who replaced the vacancy of Antonin Scalia after his death in 2016, and Associate Brett Kavanaugh, who replaced Anthony Kennedy after his retirement in 2018, restructured the neutrality of the court.

Given the extensive undermining of reproductive rights, the current Supreme Court leaning suggests the outcome of June Medical Services v. Russo could potentially establish a new abortion precedent that overrules the protections of Roe v. Wade. This uncertain future could jeopardize the future of abortion services in America.