The Emotions Behind The 2020 Presidential Election

After an abusive and traumatizing four years, Biden and Harris's victory is a massive weight lifted off our shoulders. 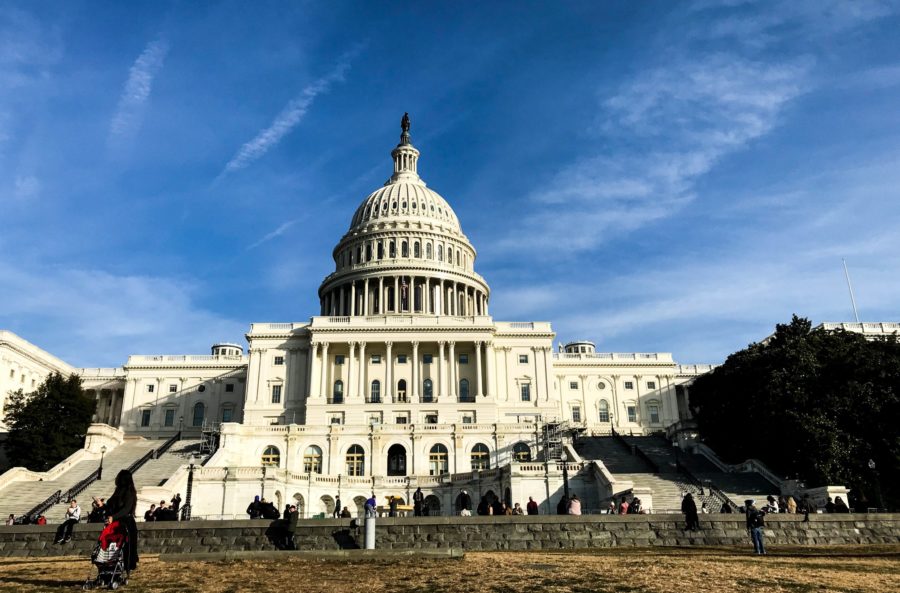 View of the Capitol from the mall.

On November 9, 2016, my dad knocked on my door to come in and wake me up at 5:30 a.m., just like every other school morning. However, this morning was starkly different from the rest – I rolled over and almost instantaneously recalled the importance the previous night.

“Who won?” I asked apprehensively.

“Unfortunately, not Hillary.” His voice shook slightly as he leaned back against my bedroom wall. He offered me breakfast and I denied, and as he left my room, I curled up under my bed sheets.

I do not remember how long I stayed under my bed sheets. I do not remember my exact thoughts or what my ten-year-old brain was processing. I do not remember if I was even processing this information. This period of time, the few minutes after that brief conversation, feels like a blur in my mind. I do remember, however, one or two tears streaming down my face, and this awful feeling of dread in my stomach.

Almost four years later, my emotions could not have been a stronger contradiction.

Around 8 a.m. on November 7, the light outside my bedroom window woke me up, and out of habit, I reached over to check my phone. My heart immediately dropped and a sharp thrust of adrenaline jolted through my body as I realized that Biden had won. It was the most surreal, serotonin-filled moment of my life. It felt like I could fully breathe for the first time, like a massive weight had been lifted off my shoulders and heart. All of the fear and anger and sadness and exhaustion I had been carrying didn’t go away permanently, but it was certainly the last thing on my mind that morning, as I lay in my bed underneath the sheets, tears streaming down my face, texting my best friends in all caps.

I wasn’t necessarily excited that we voted Joe Biden and Kamala Harris in. Both of them have pasts that disqualify them as my ideal candidates. While they have both recognized their part in making America a less progressive place and have vowed to move forward, it is still hard for me and many people to fully accept them as a representative of what is known as the progressive party. But I was so excited, so relieved, so reassured that America is attempting to take one collective step forward by voting out Donald Trump.

I don’t know if I’ll ever fully process or be able to explain what emotions I was feeling. I can best describe it as exhilaration. I think what I was truly thinking at that moment was, “We have a chance at being okay.”

My emotions were mainly surrounded around the knowledge that people who were once hated by their leaders would now feel some form of love or respect from their incoming president.

Young Latinx immigrants, or “Dreamers,” could be welcomed by the leader of the country they needed help from and not have to worry that their president didn’t want them there; they wouldn’t be called “rapists” and “drug dealers” and “criminals” by their protector. Women could have control over their bodies and have respect for their decision, whatever it may be, from their president. Gay couples could get married, adopt, have a job and simply live up to the equality-based principles they were promised and not have their basic human rights at risk by someone who doesn’t believe in the basic values of love. The transgender community could at last feel some form of validation after the four years of bullying and resentment. Muslims could enter our country and feel wanted and respected and not be seen as ultimate terrorists. Disabilities would be embraced rather than mocked. People who were once hated and seen as less than would be loved and seen as equals. Essentially, our treatment of people would transform from hatred into love; division and demonization would transform into unity; recklessness and despair would transform into passion and hope.

This being said, one thing that progressives, specifically white, straight, cisgender progressives must remember, is that the end of Trump is not the end of these forms of bigotry and oppression. Trump was not the sole factor of racism, sexism, homophobia, transphobia, xenophobia, Islamophobia, science denial, and hatred in America. Rather, he was a product and enabler of it.

Despite these passionate and personal views, none of these issues affect me. Racism, transphobia, xenophobia, and Islamophobia are all issues I can only witness and attempt to fight. My extreme levels of privilege as a white cisgender American simply hand me the opportunity to sit back and do nothing, because Trump’s reelection would have affected me in the most trivial ways possible.

But as an American, it is my job to use this privilege to fight for the betterment of all American lives – not just my own. That is what being an American is all about. That is true patriotism.

I think that’s what Trump supporters do not understand. That’s what they truly miss out on. They miss out on empathy, on concern for other people’s wellbeing, on the fundamentals of kindness, on love – on the very basic values that make them human.

Someone once told me that “I disagree with most things you support, but we can still be friends.” I agreed with her then, as I saw her as a genuinely kind human – but I soon learned that both cannot exist. You can support Trump and be polite and treat other people well on the exterior. What you cannot do is support Trump and be a kind human being at your core. Tolerating and supporting hatred and bigotry automatically allows for hatred and bigotry to become part of you. I grew to understand that supporting Trump wasn’t just a political stance; it was a moral one.

But if our nation’s leader is no longer an enabler of this bigotry, we have a chance at slowing it down and changing the trajectory of our future as a nation.

In order to fully change this, we must educate ourselves and know that we, as a nation, are built on aversion and hostility. We are built on the exploitation of Native Americans. We are built on the backs of enslaved people. We are built on the very systemic racism that we are still fighting. Our foundation is oppression, exploitation, discrimination, brutalization, and hatred towards groups that are different than wealthy, white, straight, cisgender Christians. Our core values, inscripted in the Declaration of Independence and the Constitution, were written and signed by brutally racist, sexist classists.

Despite this abhorrent history with people outside the group mentioned above, I love America. I know I love it because I care enough about its future. I love it, not because of who we’ve been or who we are now, but because of who we could become. I truly believe that we can be a great country. Greatness does not stem from always being “great.” Greatness comes from growth, development, progression, accountability, amendments. Simply because we have not always been great – we have been such long distances from it – does not mean that our future must remain that way. Our past is not an obstacle that we can’t avoid or move around; our past is a painful reminder of why we are ever-changing and progressing.

We will never be able to erase our history or simply pretend that these atrocities did not occur. But what we can do is keep working. Keep progressing. Keep listening to activists and leaders and keep holding them accountable and ensuring they fulfill their promises. Keep on fighting for a more equitable future, a safer future, a healthier future, a kinder future. And I think the best way to start is what we have already accomplished: by voting out Donald Trump and electing a leader willing to change, evolve, and most importantly – love.