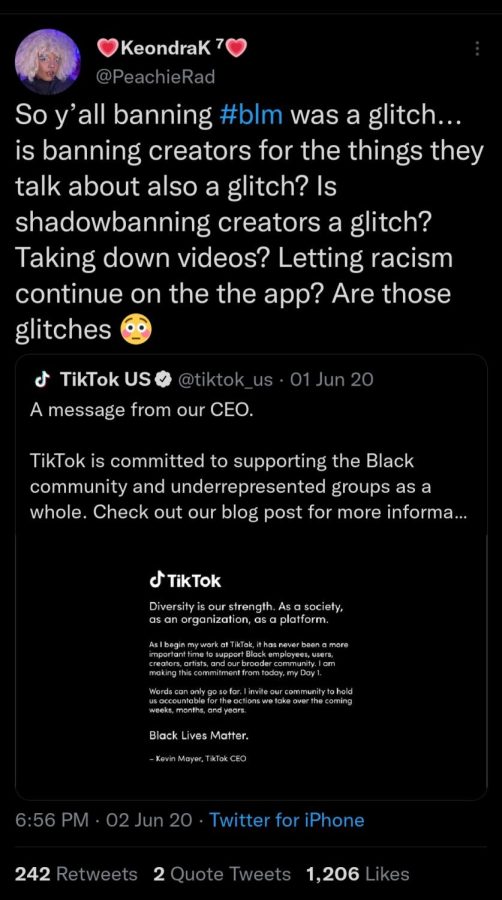 Tiktok is a widely known app that allows users to make videos that range from five seconds to three minutes. The app that used to be known for dancing and lip-syncing has now evolved into numerous types of entertainment. The types of videos on the app can consist of baking, art, comedy, music, and many others.

Throughout COVID-19, a plethora of Black creators have been censored or shadowbanned. They would be for showing their talents or talking about an issue that involves racism.

“Certain social media platforms will try to silence racism and silence black voices,” Aaliyah Chandler, a student at Central Kitsap High School, said. “For example, TikTok often banned creators when they post too much about racism or things going on.”

There have been instances where the algorithm favors content made by white people over the content created by black people on Tiktok.

“…They have it “easy” when it comes to social interactions, either in person or online,” Zavion Stringer said. “…Some have not faced many challenges in real life that affect them. We see day-to-day POC getting hate crimes online, and made fun of because of how they look, but if we look on the other side of the spectrum, the non-POC get treated as gods and goddesses because they are the majority.”

Black creators like Jalaiah Harmon have experienced this first hand. In early 2020, Harmon created a viral dance called the Renegade on Tiktok. But she did not get credit for her dance because it had been given to the most followed TikTok creator (at the time) Charlie D’Amelio.

“I was happy when I saw my dance all over,” Harmon said in the New York Times. “But I wanted credit for it.”

There have also been instances where people on Tik Tok would use other cultures for views or attention. The one that took most of Tik Tok by storm early last year was the #FufuChallenge.

The #FufuChallenge consisted of Tik Tok creators, mostly non-people of color, trying fufu and recording their reactions. Fufu is a West African food made of starchy foods such as cassava, yams, or plantains that get boiled, pounded, and rolled into a ball. One eats it by breaking a small piece to scoop it into a vegetable or meat soup and swallow without chewing it.

At first, it became a trend to show off West African food. But it then slowly started evolving to people being disrespectful. They would call it many names, make a face, and spit it out.

Trends like these on social media are examples of people partaking in other cultures because it’s “trendy”.

Chandler claims that trying new cultures could make one more knowledge of them but, “they just need to do it the right way”.

People of color can find it hard to stay on social media because how it can make them feel ostracized or outcasted because of their skin tone.

“I feel really bad for people who are finally brave enough to show their face and then all of a sudden, get bullied because of the way their body or the way their skin tone looks.” Z Getachew, a student at CK high school said.

Social media platforms have instances of being called out for keeping people who were discriminatory toward black people. Non-black people do such as black face, saying the N-word or other derogatory words, using clothes or items from black culture and calling it “the new thing”, and others.

“…We see day-to-day people fantasizing about Black culture by using durags and dressing as a Black person because they thought it was a trend,” Stringer said. “I mean this in the most respectful way possible, if you aren’t a part of the community, then don’t do it.”

Twitter is also another social media platform where its algorithm has issues with banning or censoring.

In a study, algorithms treat black users’ tweets as sexism, hate speech, harassment, and abuse because of AAE (African American English). Black tweets would usually have slang and words non-POC are never allowed to say (for example, the N-word). Algorithms fail to catch onto this. Which means they are more likely to get flagged or banned.

This jeopardization could lead to the deletion of videos or tweets talking about racism.

“Some social media platforms don’t see racism at all,” Stringer said. “…I believe they see racism as “playing around” and don’t care to stop it if a white person does it, but if a POC says something that may seem racist, it’s immediately taken care of. There is no sense of equality being shown at all.”

There are many ways people can learn about POC backgrounds and stories.

People can think of many ways of solving social media inequality. Whether it be polls, pushing videos, or giving more education on other cultures. It all depends on how the algorithm will work to change its current state at the moment.

“I think social media could fix the algorithm so that all people have an equal chance of being seen,” Chandler said. “I feel social media should do better at pushing out videos [with] true information and [doing] a better job of getting rid of fake and false information.